Who knew one picture could cause so much of an outrage?

There is a saying that goes, “A picture is worth a thousand words”. Well in this case, this picture here is definitely causing way more than that.
There has been a lot of outrage by the public after a photo showing 16 West Point cadets who were supposedly raising their fists in support of the Black Lives Matter movement made its way to the Internet.

Apparently, the photo is of the all-black, all-female cadets, and they can be seen raising their fists, although the gesture is one that has been known to be associated with a controversial movement of its own.

However, this gesture has also been used for many centuries, and it is used to depict resistance by a wide array of groups, from suffragists to labor unions to the Black Panthers.

According to a report by the Army Times, the picture was received on the 4th of May from a few concerned readers who expressed worries over the fact that it was possible the cadets had violated Directive 1334:10 of the Department of Defense, as regards Political Activities by Members of the Armed Forces. According to the directive cadets, are discouraged from engaging in “partisan political activity” when they are clad in their uniforms. 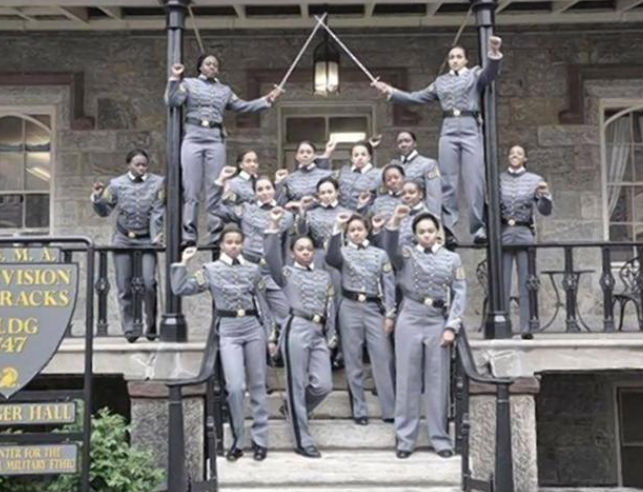 John Burk, a motivational life coach who spent some time as a soldier, accused the cadets of aligning themselves with a known political movement. He said on his page on Facebook that he was contacted by an anonymous member of the military service, who expressed their concern with the contents of the picture.

According to a report by the Daily News, the anonymous source said to Burk about the picture, “It really is a bit of a touchy subject, this one. It is possible for us to get kicked out of West point, or forced to repeat some years for what we in the military know as a ‘respect board’. These can easily be given for just making someone angry, so there’s no doubt to the fact that absolutely no one would like to get kicked out of the college… especially for something like this”

Ever since Burk made that post on his Facebook page, it has gone viral, with thousands of shares, likes and comments coming in from different people all over the world. A lot of people dropped comments that expressed their unhappiness at what the cadets did, while some felt like it wasn’t so much of a big deal. Up till now, the debate seems to be raging on social media.

One commenter wrote, “The purpose of equality is holding both men and women to the exact same standards. THESE WOMEN SHOULD BE KICKED OUT!!!”
Another wrote, “They should immediately expel all of those cadets”

“We can already confirm that the cadets who are seen in this photo are indeed members of the United States Military Academy’s Class of 2016,” said Lt. Christopher Kaser, who works as a spokesperson for West Point, in a statement sent via Email to both the Daily News and the Army Times. “Currently, we have officials of the Academy conducting an investigation into the matter”

Till now, it remains to be seen the kinds of disciplinary actions that the Army will take, if any would even be taken at all. The cadets in the photo have also not been identified.