Prizes are in order for these nurses.

All that this man wanted to do was smoke a cigarette, take in a glass of some cold white wine, and look at the sun as it set. For a lot of us, these are pleasures that we enjoy on a daily basis and which we tend to take for granted. However, for 75 year old Carsten Hansen, this was a dying wish.

Hansen has been admitted into a hospital in Denmark since the early part of April after he suffered a ruptured aortic aneurysm. The surgical procedure that is required to repair this aneurysm is quite complicated and it takes an awful lot of time. It also requires that the patent stays in the hospital for a few days after it is done.

Hansen was too ill and frail to perform the surgery and without it, there was a high probability that he wouldn’t survive for more than a few hours (due to the internal bleeding that was caused by the aneurysm).

So Hansen sat down in his hospital ward with nothing more than a few more hours to live. However, he wasn’t planning on going out just like that, and he decided to make a bold request. To wit, he told his nurses that he would like to enjoy his final minutes on the Earth with a cigarette, a cold glass of white wine, and a view of the sun as it set. 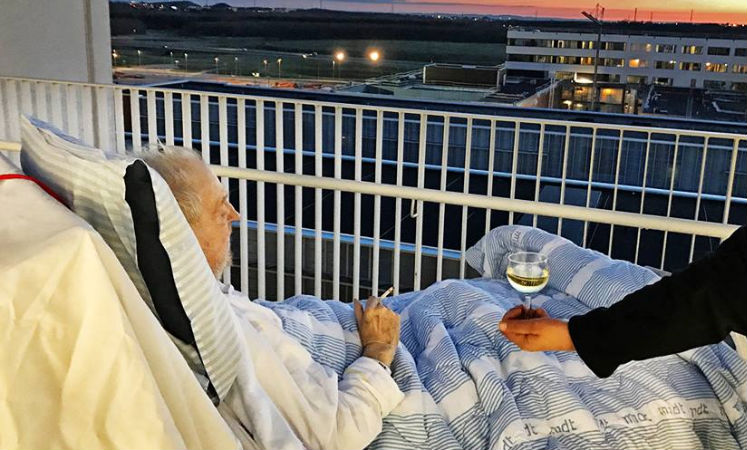 The nurses were able to get some white wine, and Hansen was lucky to be put in a room on a floor that had access to a balcony. However, it was the third request- a cigarette- that caused a little bit of a problem. There was a strict “no smoking” policy that was in place at the hospital where Hansen was being treated, but Hansen’s nurse- Rikki Kvist- decided that it wouldn’t be too bad for them to break this rule.

So, the nurses decided to wheel Hansen out to the balcony with a glass of his requested cold white wine. They lit a cigarette for him, and they left him alone to enjoy a few quite moments with his family members – moments that would serve as his final, beautiful ones.

Kvist said to the Telegraph, “We made sure that the environment was as relaxed and cozy as possible. Of course, there were some of his relatives who were affected by the fact that he was going to die, and they were visibly sad. However, the environment was real cozy, and there was a lot of humor as well”

The nurses shared the entire experience in a post on Facebook, where they were met with an overwhelming outpour of love and appreciation for their action, especially the bravery and defiance of nurse Kvist.

One user wrote, “It was exactly as it should be. I really wish that I could have done this for my own dad. It’s really good on his family, and a lot of respect to the staff at the hospital for showing some humanity”

Another user sad, “You’re not just a hospital, but a place where people are free to dream, even if they won’t get any more opportunities from life”

A third user chimed in, “In times like these where it seems like humanity fades away, these kinds of posts help keep the fire burning. I wish Mr. Hansen’s family the very best”