Life is a miracle. All around us we see so many wonderful and beautiful things every day. But perhaps the most beautiful and wonderful of all of life’s amazing miracles is the miracle of birth. Babies are just so adorable. And they do some super amazing things too, from the most adorable smile to a lovely giggle. They never cease to amaze us with the wonderful things they do. 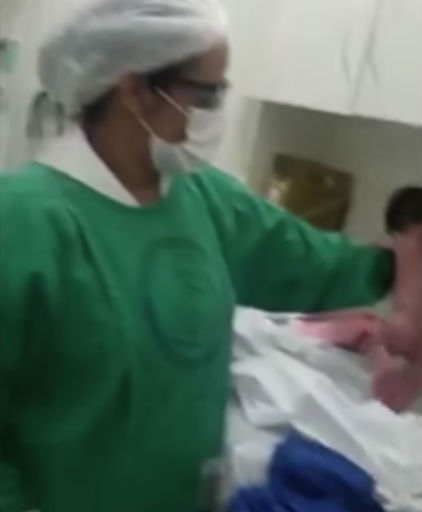 But one new baby took things to another level when she went ahead and did something so remarkable that everyone online is talking about it. In a Viral video which was posted on Facebook and has been viewed over 50 million times and shared more than 1.3 million times which, the baby was seen defying all odds and taking what looks like her first steps just moments after she was delivered.

The new baby mesmerized nurses after she tried to move her legs imitating a walking motion when nurses were trying to clean her up after she was born. The excited nurse who was holding her can be heard in the video saying: “Oh my gosh, the girl is walking. Good gracious!” another nurse quickly brought out a camera and started filming. The nurse who was holding the baby explained that the newborn simply refused to lie down and just pushed to her feet and tried to walk an act quite unusual for a newborn: “Heavens above. If you told people what has just happened no one would believe it unless they saw it with their own eyes.” She exclaimed excitedly.

What looked bizarre to you in the video might actually not be as unreal or as unusual as it seems as experts are saying that the unusual action of the baby trying to take some steps just minutes after she was born isn’t really a rare occurrence. Megan Heere an assistant professor of pediatrics at the Temple University and Medical director at Temple’s Well Baby Nursery said the action of the baby is a totally normal reflex that babies have. “If anything, this video really highlights the reflex and is a good example of what normal babies do.” She explained.

This she labeled as “primitive reflexes” which are sometimes apparent at birth. This particular one in the viral video is what she referred to as the step or walking reflex. In the real sense of it, the baby isn’t actually walking even though it looks like it. All she is doing is making stepping motions. According to another expert in baby care, Daniela Corbetta, the director of Infant Perception-Action Laboratory, University of Tennessee Knoxville, this type of reflex has been documented in newborns as far back as the 1940s and it allows babies to “walk” or better put make stepping motions if they are placed in a solid surface and can occur as early as the first month of a baby’s life or in the case of the baby in the footage as early as the first few minutes. 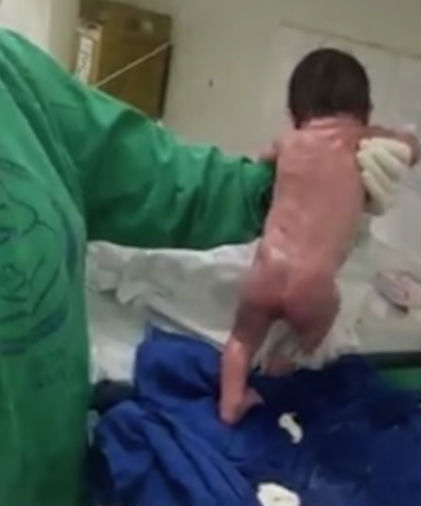 1. They are always listening — you think that innocent little puddle in your hands can’t hear you? Think again. Studies have shown that babies can actually hear sounds even before they were born and can recognize their mother’s voice as early as when they are two days old. They might not be able to understand what you are saying yet, but they can definitely hear you.
2. Another point related to the first one is that a baby’s sense of hearing is so sophisticated that they can determine where a sound is coming from just 10 minutes after they are born.

3. Babies can cry as soon as they are born, but their eyes stay dry for a few weeks or even months after birth. Tears only begin to appear about three weeks after a child is born and can come as late as four months for some babies. And you don’t have to feel so bad when you see them shed tears. It contains stress hormones that are meant to calm your baby down when they are agitated.
4. Like adults, babies have a voice peculiar to them and it is distinct even just three days after birth. A mother can recognize her baby’s cry in a room where you have other crying babies.
5. Babies can read and respond to your tone appropriately. If you speak to a baby with a mean voice even with a smile or your face, the baby will most likely show signs of agitation.
6. A newborn’s body is able to adjust to temperature changes in a room for adaptation. If the baby is too cold, you will see her move around in order to keep herself warm and if she is too hot, she will fling out her arms and legs as if she’s sunbathing. You should watch out for these signs and check the room temperature when you notice it.
7. Ever wonder why your baby looks so adorable right after birth, it’s because their pupils dilate which makes them look more attractive and get the parents hooked in love almost instantly.
8. For years many people believed a baby’s smile is just because they are copying the actions of grownups around them, but they’ve got it all wrong. Babies can smile instinctively, even blind babies smile too.
9. A baby is connected to its mother’s emotions and feelings. A recent study revealed that when pregnant women listen to a song that they enjoyed, the baby responds by moving around. This showed a connection between the mother’s emotion and the baby’s reaction.
10. Ever wonder why babies look so cute and irresistible? Turns out nature designed it that way in order trigger an emotional response that will elicit a feeling of love and protection from you. So if you are wondering why they always have that sweet little nose, large round eyes, chubby arms, and legs, now you have the answer. Even cartoonists know this and they focus more on these attributes and exaggerate them to make babies look cute in the movies.